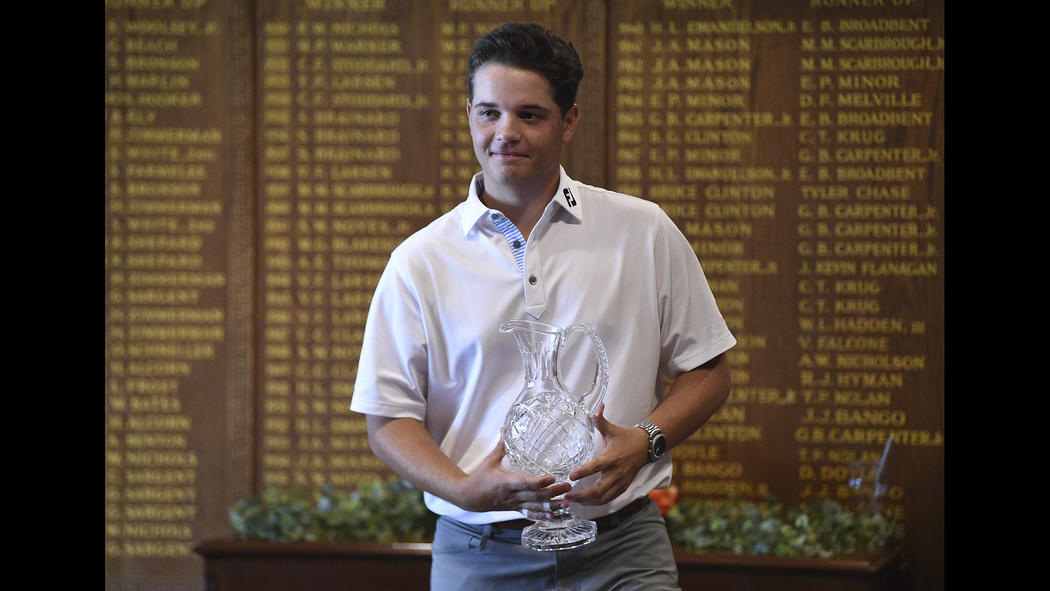 John VanDerLaan looked to his caddie, Jayden Brodeur, as they approached the 18th tee in the final round of play at the Connecticut Open on Wednesday at New Haven Country Club.“We need to make four here, because I’m sure he will,” the 22-year-old Southbury native said.

He was CJ Swift, the man who was on VanDerLaan’s coattails from start to finish on Wednesday. Swift started the day one shot back of the leader VanDerLaan, and as the two parred the 17th hole, he remained one shot back heading into the final hole.

VanDerLaan made four. He sank a 3-foot putt for par. His dad, also named John, who won his son his first set of U.S. Kid’s clubs at a member-guest tournament at the New Haven Country Club two decades ago, was among the gallery watching the lead group wrap up.

Contrary to VanDerLaan’s prediction, Swift did not make four. His fairway shot landed in the tall grass adjacent to the hole. His following shot landed roughly 35 feet from the hole. He settled for bogey, and finished two strokes behind VanDerLaan.

For the first time all day, VanDerLaan could exhale. He shot a 4-under 66 on the day, which dropped his three-day total to 16-under 194. It was more than enough to win his first professional event.

Swift, of Great River Golf Club, finished in second at 14 under. In third was Adam Rainaud, who was 8 under for the tournament.

VanDerLaan never led by more than three shots all day. He birdied the third and fifth holes to take that lead, but Swift birdied 8, 9 and 10 to even things back up.

“It was a lot of fun, it was really exciting,” VanDerLaan said. “You can’t let up for a single shot. One bad shot, you make one mistake, and all of a sudden you’re trailing.”

But VanDerLaan’s mistakes were minor. He bogeyed just once all day, on No. 9. But he never trailed. When Swift birdied on 12, so did he. VanDerLaan didn’t take the definitive lead, however, until the 15th hole, when he nailed a birdie putt to move to 16 under.

VanDerLaan claimed he didn’t hit the ball as well as he did on Tuesday, when he shot a tournament-record 62. But he excelled in the short game, specifically his putting. He sank a 35-foot birdie putt on the 12th hole to match Swift’s birdie.

Swift willed himself into contention in the second round with a 6-under 64 to move into second place at 11 under. His strong play kept up in the final round, and he had an idea that 16 under would be the number to reach.

Sure enough, it was. But it wasn’t Swift who made it there.

“He just played rock solid. I think he had what, one or two bogeys?” Swift said. “Four, five, six birdies. He hit the fairways, hit the greens. He was pretty solid with his putter, too. Just hats off to him. He played well, beat me, beat the rest of the field, too.”

Swift has been in position to win the event in the past. Last year, he placed tied for seventh at 7 under.

“I was nervous, but I don’t think I showed it very well,” he said. “I kind of just kept tunnel vision, one shot at a time. I definitely felt the pressure coming in. Big tournament, state open. It’s something you dream about winning growing up.”

VanDerLaan got to live out those dreams in his first shot at the event. Since May, he’s won the NCAA Division II Individual National Championship while at Florida Southern, the Barbasol Shootout — which earned him an exemption into the Barbasol Championship, a PGA Tour event — and now the Connecticut Open.

“It’s just been a lot of fun,” he said. “I’ve been playing some good golf for a while now, and I’ve taken advantage of it. It’s nice to see the hard work pay off. Third start of my pro career, it’s pretty nice to get a win so early on.”